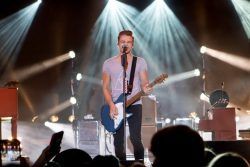 The First Tennessee Soybean Festival was held September 6-11, 1994 through joint efforts of city leaders and UTM officials.  Dr. Jerry Gresham, Martin Mayor Larry Taylor, and Park Wells of the Tennessee Soybean Promotion Council played an integrate role in the creation of the Soybean Festival.  In 1994, the first ever Soybean Festival was proud to host a little more than 25 events.  The first big name performers were Tim McGraw and Suzy Bogguss.  Events such as a tractor rodeo and toy pedal tractor pull showcased the spirit of agriculture that is prevalent today. 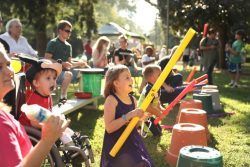 Through the partnership with UTM, visitors were treated to a UTM campus tour led by former grounds manager and green thumb enthusiast Guy Robbins.  Visitors traveled in tractor drawn wagons filled with hay bales during the tours.  The first ever festival boasted a cheerleader competition as well as an antique tractor pull.  The festival has grown tremendously since its inception in 1994; however, the tradition of celebrating agriculture and one of the country’s biggest cash crops are the common bond that keeps the festival strong.   With the idea that the festival truly is at the “crossroads of good living”, the celebration of the soybean continues to allow people to pay homage to a tiny yet worthy vegetable that is capable of feeding and fueling everyday lives.